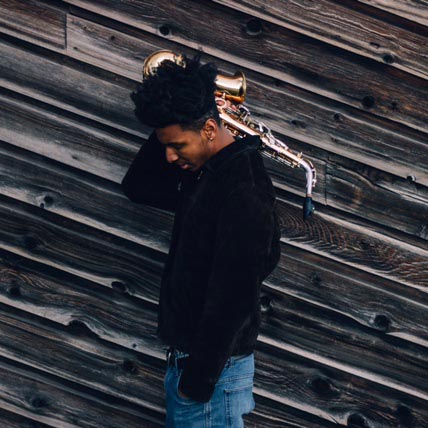 Masego is a Jamaican Rooted, DMV based Jazz Vocalist, Saxophonist and Producer. His “Trap Scatting,” “Arbitrary Sax” and “TrapHouseJazz” band has won him praise and support from names like Diddy, Solange, Michelle Phan and music authorities such as XXL, BBC radio, HOT97, HypeTrak, DJ Booth, Okay Player and even Universal Music Group. He captivates every audience with his songs made on the fly via his Looper pedal as well as his witty interludes delivered with the character “Uncle Sego”. He has his own Line Dance (Sego Step), his own band and his own catch phrase. HIDY HIDY HIDY HO!. His Pink Polo EP has not even hit “the inters of net” as of yet but has everyone buzzing and excited. It will be his break out project and is expected to “change the game.”

Apart from his music, Masego is an entrepreneur and IT Specialist. He’s designed his own Iphone Application titled “Network By Masego”. This app was created to get rid of all the cliques in the art world and facilitate the development of everyone’s careers. All of your resources, skills, connects and leverage is displayed on NMB on your personal profile page. This and many helpful features will make the art community that much more connected. January 2016 is it’s expected release date, which should be yet another “game changer”.