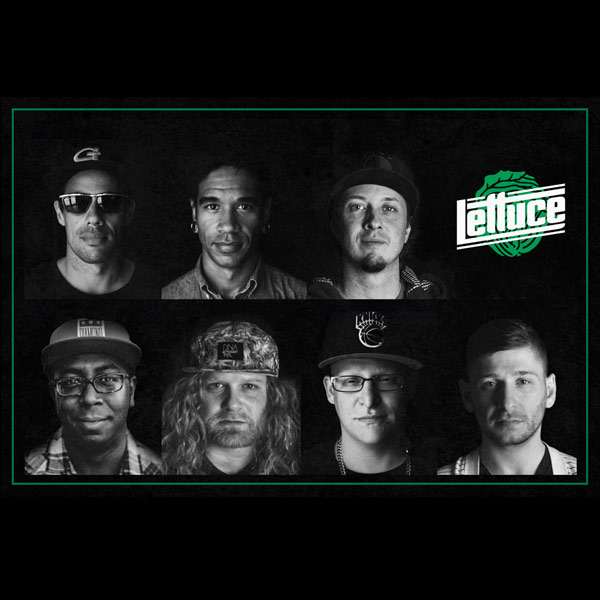 Produced by Lettuce and Co-Produced, recorded/mixed by Joel Hamilton at Brooklyn’s Studio G, Crush first came to life on the road, with the band developing new material and testing it out live as they toured. “We’ve all noticed that our music goes into a lot of different directions onstage, and we wanted to capture that in a way that we never really have before,” says Coomes, who names classic psychedelia and ‘90s hip-hop among Lettuce’s key inspirations on Crush. “It’s definitely more wide-open in terms of style, but it still stays true to the funk.”

The follow-up to 2012’s Fly, Crush finds Lettuce brilliantly infusing their psychedelic and hip-hop sensibilities into bass-heavy funk. With its spidery guitar work and hypnotic beats, “Phyllis” is a delicately sprawling epic that embodies what Deitch refers to as “a chill-hop vibe that’s kind of the flip-side of all the powerful uptempo funk that people might expect from us.” On “Get Greasy,” Lettuce gives a nod to the groove-fueled EDM subgenre known as future funk, building off its highly danceable rhythm with a blissfully loose and horn-laced arrangement. And on “He Made a Woman Out of Me,” guest vocalist Alecia Chakour lends her bluesy growl to a scorching take on Bobbie Gentry’s 1970 country-soul classic.

Whether playing homage to Led Zeppelin on the fiery and guitar-driven “Silverdome” or delivering a deeply riveting and richly textured hip-hop medley with “Oresteia,” Lettuce maneuver through Crush’s kaleidoscopic sound with sophisticated ease and powerful synergy. “More so than any of the records we’ve done before, this album is very much about the improvised grooves and improvised solos,” says Krasno. “Instead of going at it like, ‘Here’s a melody, now here’s a guitar solo, here’s another melody, here’s a sax solo,’ everyone’s leaning on each other in a way that’s completely unspoken. It’s all of us moving as one unit and creating this new sound together.”

According to Lettuce, that sense of unity and togetherness has much to do with a camaraderie that’s only intensified over the lifespan of the band. Formed in 1992, when several band members attended a summer program at Boston’s Berklee College of Music as teenagers, Lettuce was founded on a shared love of legendary funk artists like Earth, Wind & Fire and Tower of Power. After returning to Berklee as undergrads in 1994, Lettuce started playing in local clubs and steadily built up a following that soon extended to cities across the country and then throughout the world. Releasing their studio debut Outta Here in 2002 and its follow-up album Rage! in 2009, the band dedicated the coming years to balancing their frequent touring with involvement in a host of other musical endeavors (including Evans and Krasno’s role as founding members of acclaimed soul/jazz trio Soulive).

In recent years, Lettuce have watched their fanbase expand as they’ve hit bigger and bigger stages and earned their name as a can’t-miss festival act. And in making Crush, the band had no trouble harnessing the spirit of their explosive live show. “Some of these shows we’ve played over the past couple years have been so amazing, it’s like you go home a different person,” says Coomes. “I’m sure remembering those moments in our minds and our hearts helped bring out something special when we were recording these new songs.”

So while Crush offers everything from all-out party jams to headphone-ready journeys into space funk, each track was born from an unabashed joy and love of live performance. “That energy we get when it’s prime time and we’re about to go onstage and we’re just excited beyond belief—that all came out on this new album,” says Deitch. “There’s a feeling that the band is rising, and it’s a really beautiful thing.”