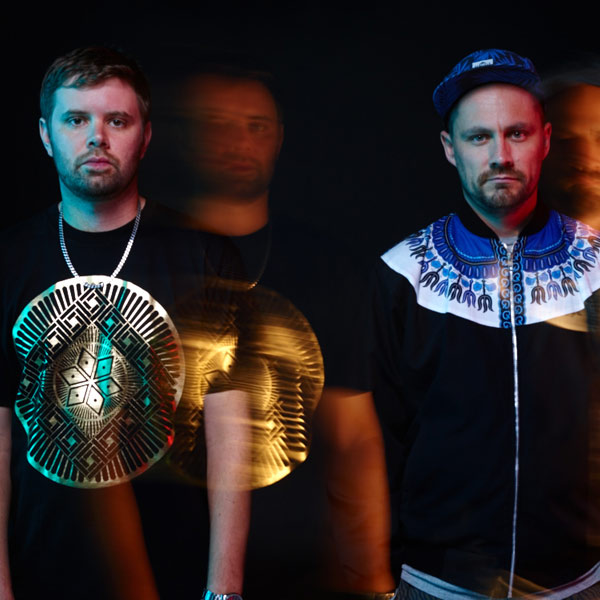 Hermitude are an award-winning electronic production duo hailing from Sydney. Over the past 12 months their profile has exploded off the back of their Australian Music Prize-winning album HyperParadise. Hermitude have fast become one of Australia’s most in-demand touring acts and are set to make further inroads internationally in 2014.

They formed in 2001 when Sydney duo Luke Dubs (Luke Dubber) and Elgusto (Angus Stuart) paired up with a shared love of beats and turntablism. The offspring of professional musicians, they’d performed together in jazz and funk bands since their early teens. Hermitude’s first EP was the vinyl-only Imaginary Friends out through Elefant Traks. They followed this up with their debut album in 2003—the critically adored Alleys to Valleys. It established Hermitude’s reputation for impeccable instrumental hip hop & electronic production—esteemed radio figure Tim Ritchie called it “One of the best hip hop/breaks releases I’ve ever heard”.

Their second album Tales of the Drift followed in 2005 after numerous tours and support slots. Their Cuban-influenced rhythms (Elgusto undertook percussion studies in Cuba as a teen) had blended elegantly with their formal jazz and classical background breathing new life into their electronic / instrumental hip hop sound. The first single ‘Fallen Giants’ took triple j by storm and sat on high rotation for months.
By now Hermitude had established their reputation for brilliant studio productions with an engaging and innovative live show—incorporating a confident, almost effortless musicianship with a deft grasp of technology. Over the next few years they toured Asia, Europe and the USA playing with underground hip hop artists and electronic acts (DJ Krush, Kentaro, Aceyalone, Dizzee Rascal & more).
In 2007 they released the Rare Sightings EP before embarking on their third album, Threads in 2008. Hermitude’s sound progressed into more electronic territory, embracing instrumental hip hop’s electronic relative ‘future beats’. Artists such as Glitch Mob and DJ Krush started dropping Hermitude songs in live sets.
In September 2011 Hermitude released the summery monster single ‘Speak of the Devil’, landing it in the triple j Hottest 100. Hermitude’s fourth album HyperParadise was released in Feb 2012 and charted in the Australian Top 40. The accompanying tour quickly selling-out. Hermitude stepped up their festival appearances joining the Groovin the Moo Tour, playingCome Together and also supporting 360 on his Australian Tour.
They made in-roads internationally, signing a global publishing deal with Sony/ATV and having ‘Speak of The Devil’ released by Regal Recordings/Parlophone (EMI) in the UK and on Astralwerks in the US. The song enjoyed regular spins on BBC Radio 1 and across European radio. To support their European release, Hermitude performed at Fusion Festival (Germany) and played a sold-out headline show in London.
Fresh from their overseas success Hermitude undertook some high-profile remixes for the likes of The Presets, Flume, Missy Higgins. They also co-produced Urthboy’s acclaimed fourth album Smokey’s Haunt. The duo released the Parallel Paradise Remix EP which featured the Flume’s remix of HyperParadise. The tune stormed to #18 in triple j’s Hottest 100, quickly becoming a summer anthem. The single is certified platinum and still selling strongly.
Hermitude won over new crowds on the Parklife tour in September, won the AIR Award for Best Dance/Electronic Release and got two nominations for ARIAs for Best Dance Release & Best Video. November saw the duo team up with Elefant Traks label-mates to perform at the Sydney Opera House for the Graphic Festival-commissioned Dr Seuss Meets Elefant Traks. In December Hermitude were nominated for a j award for Australian Album of the Year and returned to the summer festival circuit with shows at Homebake, Woodford Folk Festival and Rhythm & Alps (NZ).
The Villain Tour in January/February 2013 sold-out in record time and saw them play
to over 5000 people. Due to unprecedented demand Hermitude did 3 sold-out shows in both Sydney & Melbourne. In March Hermitude capped off an incredible 12 months winning the Australian Music Prize, one of the country’s most prestigious music awards.
They’ve since gone on to play another round of summer festival shows in Australia and have recently completed their first headline tour of New Zealand, selling out every show.