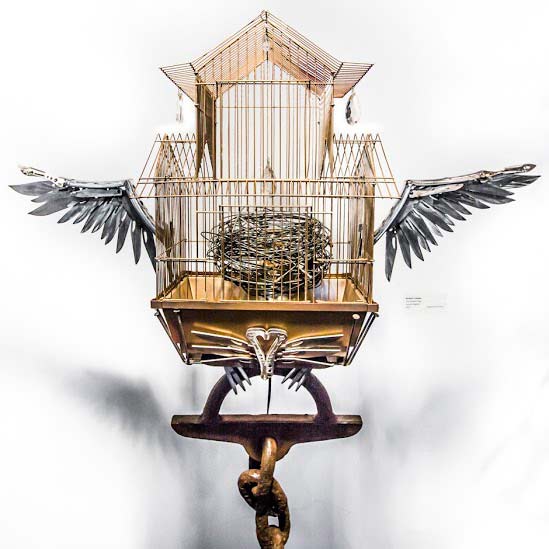 Explore this and other works from the Metal Mythos collection!

A Portland native, Richard Cawley has been designing and creating sculptural objects for over two decades. Since the beginning of his artistic career, he has been drawn to the challenge and delight of transforming the ordinary and mundane post-consumer waste of our culture into thought provoking objects of beauty and functional works of art.

His found object sculptures and installations have been commissioned for private homes and gardens, businesses, architecture firms, community spaces and large art festivals. Also an established musician and original member of The March Fourth Marching Band, Richard has found a way to merge his love of metal sculptures with his love of music and performance. He has outfitted the entire March Fourth drum section with found object drum harnesses, designed the iconic March Fourth star logo and designs and fabricates stainless steel jewelry for the band and it’s international army of fans.

After graduating with a BA in sculpture from Portland State University, Richard  worked with Clan Chattan Foundry, building casted bronze and steel fabricated sculptures for installation throughout the Northwest, including many of the sculptures on the Interstate MAX line and at the Native American Cultural Center. He went on to work with Kenneth Wright at Rocketworks Design furthering his skills in creative metal work, commercial and residential architectural fabrication and public art installations. While at Rocketworks, he helped outfit the Apotheke Modern European restaurant and bar with custom bar, lightning fixtures, handrails, tables, chairs and kinetic sculptures. Richard also had the honor of designing and constructing an interactive Pterodactyl out of bicycle parts and other found objects commissioned by Red Bull to promote their Flutag event. Other experience at Rocketworks included design and creation of custom chopper bikes and art cars.

Since leaving Rocketworks, Richard has gone on to design and fabricate large scale sculptural installations at festivals such as Burning Man, Coachella Music and Arts Festival and Emergensee.  His permanent sculptural designs have been installed at three community-oriented, affordable green housing projects for the award winning development company Orange Splot LLC. Other smaller works including trellises, garden gates, stairs, sculptural water fountains and handrails can be found in gardens and homes throughout Portland Metro.

Of his work, Portland Spaces Magazine describes it as an “elaborate calligraphy of rims, sprockets, forks and spokes.” (2008)