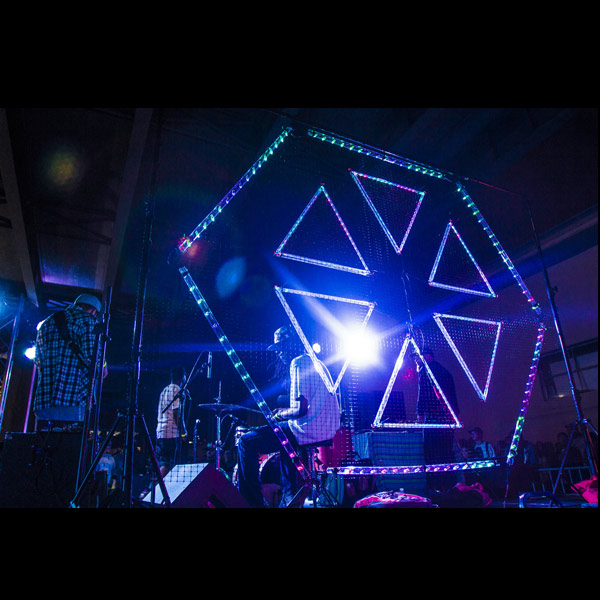 Modular Cymatic Triangles by CymaSpace is a large interactive LED-based installation that conveys the experience of sound and music as light, color and movement. It has been featured at OMSI After Dark: Science of Sound, PDX Pop Now!, PDX Winter Light Festival, and more.

The piece consists of hand-built, geometric arrays of equilateral triangles, suspended in front and/or above the viewer. The installation listens in real-time and intelligently responds with colorful animations reacting to ambient sounds, or the performance of participants who directly interact with the piece.

Different sounds translate to different light movement patterns and colors providing a visual representation of audio dynamics and timbre that is both descriptive and compelling. When all is quiet, the installation enters a “dormant” state and emits a subtle ambient glow drawing in new participants.

Being modular, the array can be expended/reduced to match the installation site size.

Cymaspace is a Portland, Oregon based nonprofit that focuses on making cultural events inclusive for the Deaf and Hard of Hearing. We develop art and performances that largely feature the synergy of sound, light, and vibration–some of which have been featured on the Jimmy Kimmel Live! show, in the Oregon Museum Science and Industry (OMSI), and the Portland Winter Light Festival.

Founded by Myles de Bastion, a musician and interaction designer who also happens to be deaf, who experienced first-hand the challenge of participating in a world, that for most part takes for granted the accessibility of sound. CymaSpace serves to create bridges between the Deaf and the Hearing in a positive way that open doors for under-served minorities, changes misconceptions about deafness and is striving to make a real, socio-economic difference. We show that by lowering barriers that prevent equal access to art and culture, everyone benefits.