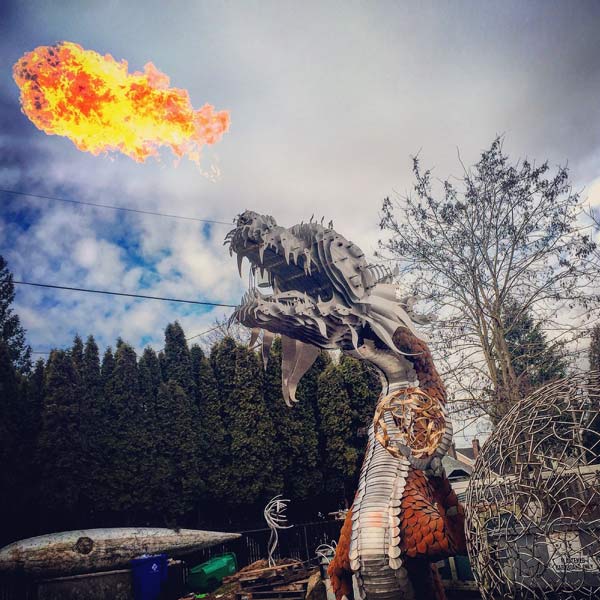 It’s been called the world’s most impractical BBQ, one of those projects that was supposed to be fairly simple but kept growing. The artist sees more additions to it in future years as it comes out of the ground…

About The Creator (Ivan McClean):

Ivan McLean and his wife Michelle Bressler live in Portland, Oregon with their three daughters, Celia Rose, Anna Grace and Molly Shea. Though born and raised in neighboring California, Ivan took the long road to Portland.

Growing up the son of a Danish contractor/ adventurer and Swedish mother/ photographer he developed a love for art and building things at a young age. During high school he picked up welding while working on ranches near the family home in Point Reyes Station, California. Ivan attended college at Cal Poly, San luis Obispo and received a BS in Farm Management thinking that ranching would be his future. Enlisting in the Peace Corps led to a 2 year stint in Zamboanga City in the Southern Philippines as an agricultural extension agent, ie. The crazy American who lives on the hill, among some of the nicest and most generous people in the world. After 2 years, Australia called and he went to live on a 700,000 acre sheep station on the Western edge of the country all the while thinking of a fellow Peace Corp volunteer, Michelle.

He moved back to Point Reyes and convinced Michelle to join him on a foggy ranch where he took care of the cows and began building gates, fences and some sculpture and furniture, which, much to his surprise, people began buying. In 1989 it was my turn to follow Michelle as she went to North Carolina to pursue a Masters Degree in Public Health at UNC. During this time he joined his brother Jason in selling to Cedana, a furniture gallery in San Francisco which morphed into Delia, a wholesale furniture producer which eventually had accounts with store across the U.S. and beyond. Taking advantage of the native marble in North Carolina, Ivan began carving, creating both representational and abstract works.

Michelle completed her degree and was hired to be the director of a rural health project in the Mississippi Delta. A big, derelict home was found in Greenwood, the realtor said,”I think I know just what you’re looking for…” . She was right and they spent 5 years, remodeling, working, getting married and having the first two southern belles, Celia and Molly. Ivan was designing and building menorahs, tables and wine racks 10 hours a day and the sculpture was put largely aside while family life took over. One morning, when Celia was about 1 ½ , she said, “Look at the Dawwwg, daddy.” And as much as they loved the South and especially Greenwood, it was time to head West to Portland, Oregon, Michelle’s home.

In the Winter of 1996, Ivan and friend Graham made the treacherous trip cross country with 2 trucks and trailers bursting with tools, marble and diapers meeting Michelle in Portland, (she flew with the girls), to another old home in need or repair and love. Molly was born a year later, the house was improved upon and the orders kept coming in for more furniture. As the girls grew, Ivan began creating sculpture again, steel, marble glass and wood were all used in hundreds of creations sold to individuals and businesses across the West.