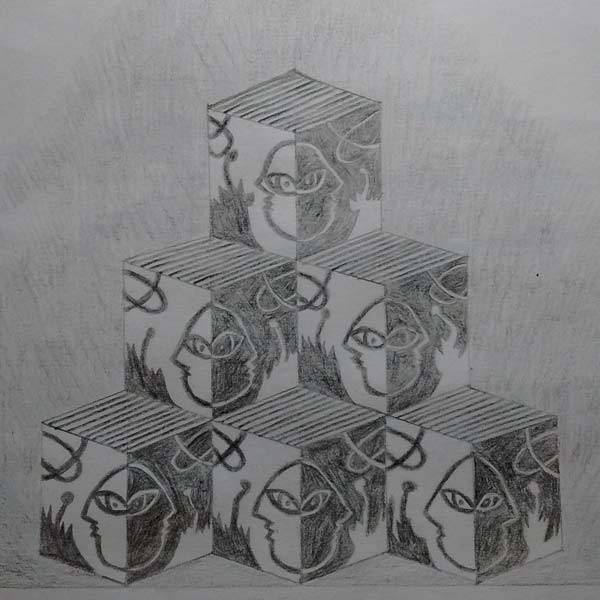 Rather than live painting, we’ll be live plastering!
With clay, sand, pigment, trowels and ceramic tools we’ll show how earthen materials can be used to create interlocking cube-shaped mural pieces. First, we apply a base coat of clay plaster. After that’s dried, we apply a second hand-made plaster on top of this, and using a method called, “sgraffito,” we carve away a design to show the plaster color below. Because of the stacked cube design, our piece will play with depth perception. The design theme we’re intending to invoke is the relationship between humans and the medicinal weeds that surround us, particularly focusing on dandelion, plantain, and nettles.
Anybody can create art just using the dirt beneath their feet. We love talking to folks about these natural materials and how else they can be used. Part of our mission is empowering people to build and create art themselves.

Julia B. June and Frances Michaelson have been building projects, plastering walls, leading workshops, and getting muddy independently and collaboratively for the last seven years. They both found Portland, OR a wonderful, accepting home for the kind of alternative, nature-based work that they prefer to do, with an emphasis on sustainability, craft, and beauty. Julia has been part of the festival build out world throughout this time, and has helped or led installations at Boom, Lightning in a Bottle, Symbiosis, and Burning Man. She now owns a natural building company with an emphasis on clay and lime wall finishes for homes. Frances and Julia first met through City Repair, an organization that puts the power of space and place back into the hands of the neighborhood people. They’ve both played the roll of Natural Building Coordinator for the placemaking teams for a number of years, and can be counted on to be found leading an imaginative project during the Village Building Convergence in May/June each year.