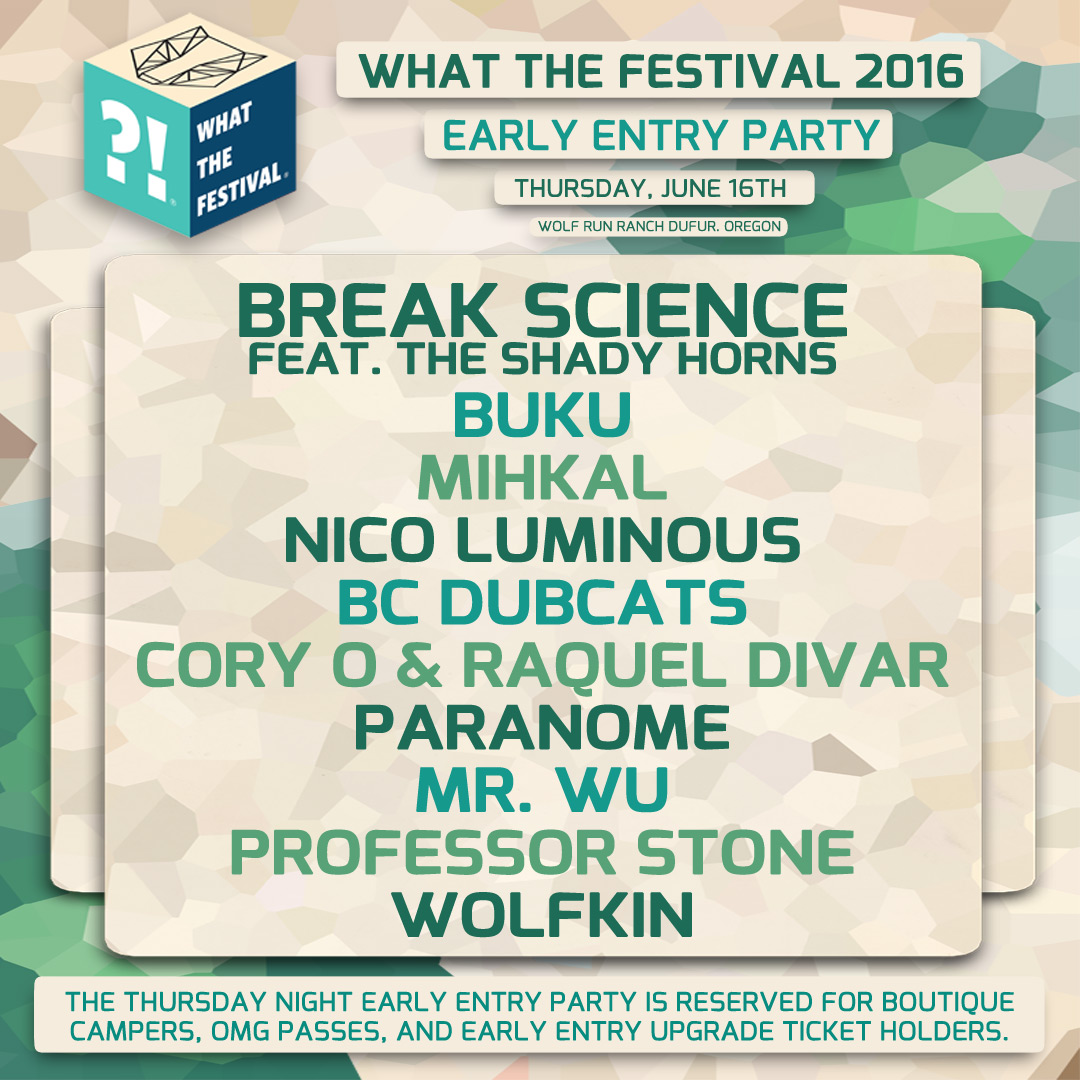 Raised and influenced by the rhythm and culture of New York City, Adam Deitch and Borahm Lee fuse generations of the city’s rich musical legacy with their own deeprooted connection to hip-hop heritage. Merging their production styles seamlessly, the duo creates a refreshingly original take on electronic music. The live show transcends expectations with Lee’s seasoned trip-hop/dub/jazz vibes on keyboards and Ableton Live and Deitch’s thunderous breakbeat style on drums.

From the track record of Robert Balotsky’s work as Buku, it’s clear that the Pittsburgh native and graduate of Music Technology is a well-equipped architect of twisted, layered soundscapes. With a menacing grasp on sound design and music theory, Buku combines deceptively simple and emotive melodies, laden with resounding low-end and intricate drum patterns. With a love of drums rooting from childhood, his work reflects his passion – emitting percussive elements only a trained ear could produce.

Buku’s debut EP release, ‘Janky’, sent a shotgun blast into the Bass Music scene – quickly gaining support and full rotation by Diplo, who described Balotsky’s production
style as ‘where dubstep is going’ at the brink of 2013. Since then, Buku’s accolades have continued to add up: he was hand-picked by Paper Diamond to join his ‘Rain Drops’ tour alongside L.A. duo GLAdiator, featured on Shade45’s ‘Sway In The Morning’ radio show, called for collaboration with Tropkillaz, and contributed his remix skills for the likes of Minnesota, Griz, Nick Catchdubs, & Brillz, to name a few.

As a result of his consistent output, Buku has quickly placed himself at the forefront of rising talent amongst North American producers – 2015 proved exactly that, seeing the release of his genre-bending ‘Might Be’ EP on OWSLA sub-label NEST HQ, as well as work on such imprints as Fool’s Gold & Main Course. With multiple massive releases on the way, non-stop touring and support from top labels & industry heavyweights, 2016 will surely see Buku’s continued upwards trajectory.

Perfecting the art of audio alchemy, Bay Area based DJ/producer Michael Anderson Lapp aka MiHKAL is quite possibly one of the West Coast’s best kept secrets. Notorious for his emotionally charged, melodically driven, bass heavy mixes, remixes and live performances, he provides dancers & listeners a sonic vehicle of transformation from which their own creative expressions can emerge. Equipped with an ear for euphonic pleasure and the ability to seamlessly weave, poly-tempo, multi-genre sound tapestries on the fly, MiHKAL can provide the soundtrack of the moment.

The intention he puts behind every show shines through, providing a personable unique experience to every live performance. Since his debut in 2008, MiHKAL has been gaining wide recognition in the EDM community…with no signs of slowing down in 2016, catch him elevating dance floors opening for acts such as G Jones, Bleep Bloop, Dimond Saints, Nico Luminous, Mimosa and gracing the stage of festivals such as Coachella and Bass Coast Music Festival. Pushing buttons and audio boundaries with sexy soundscapes, high energy performances and unconditional bass love.

West Coast Bass Maker Nico Luminous is on a mission. His unique brand of “Glitch-a-delic Soul Whomp” fuses melodic progressions, futuristic sound design and organic elements into sexy bass rollers. His original DJ sets journey through all tempo ranges and styles from Psychedelic Trap, Sensual Luvstep and Bouncey Mid-tempo Wobble jams. Hiphop, Dancehall, R&B, and Dub play a major influence in the Luminous sound to keep it grounded while traveling deep into to the sonic soundscape of modern synths and drum machines.

Incorporating Beat-boxing, live looping, and a multitude of other instruments, his performances make for an unforgettable experience.

He integrates his uplifting lyrics, and his well developed keyboard and Conga playing and often throws in his custom effects pedal belt for a show like you’ve never seen or heard before.

Based in Los Angeles, however within the last year Nico has taken his music nationally and internationally blazing his trail nonstop at events worldwide. Consistently adding
fresh tracks to his sets, he loves working with the crowd’s energy to create new sounds.

The BC Dubcats aren’t from around these parts.

With over 40 years of combined gigging experience, their inclination towards the subversive and esoteric keeps them roaming Dub Categories from Rootstep, Drum’n’Bass and Breaks to free-range, smoked out, bass-heavy selections. Dodging in and out of the global music and festival scene across 25 countries, these 2 dub libertarians deliver a special blend everywhere they go.

“These nomads chart their courses by strange stars, which might be luminous clusters of data in cyberspace or perhaps hallucinations.” – Hakim Bey

This inevitable duo is the product of a perfect synergy of space age sound design and out of this world lyrical creations to bring you the freshest thing to hit the stage on both sides of the decks. San Francisco’s, Raquel Divar, had been exploding through the Bass Music scene making science fiction a reality through forward thinking and otherworldly lyrical wizardry. Her sultry vocal style ranges from energetic rhythms to the seduction of darkness while she glides her rhymes across the Electronic Music scene. Meanwhile, a few hundred miles north Portland’s, Cory O had been focusing all things bass into a fusion of elements not meant for this world. This reaction of Lazer-Bass and Hybrid-808 spawned a Future Crunk he’s since been trying to keep contained under his new label, Tomahawk Recordings while it’s reach began to grow. Neither one able to keep their experiments locked down, their sounds eventually and inevitably collided to create the perfect storm of Rap Bass Fusion to hype the party people to the next level. Their relentless approach to the hood rich sound breaks the mold of live rap’s usual sit back and nod patterns with high energy, dance floor ready tunes. These two will have the crowd bumpin’ and jumpin’ all night long with vibes for days. From melodic elevations riding high long warm 808s and feels to the ominous poetry of the underworld bleeding through future basslines as they grind the subwoofers to dust. One way or another you will get your party on making these two one of the best live acts you will see this year.
-Sound Advice Nightlife, 2016

Mr. Wu is a genre blending, tempo switching, bass binging, good vibes DJ/designer who likes to dance and party. You can catch him playing sets that may contain: Club Hip Hop, Soulful Bass, Future Garage, 2Step, Trap, Juke, Downtempo and others. Searching for tunes that blur the genre lines and finding creative ways to blend tracks. Driven by creativity and community, he finds passion in DJing, remixing, clothing design and street dance. Always searching for the next level in all art forms while staying busy running Rythmatix.

Professor Stone, SurlyCamp, Genuine Bass, Fresno CA: Heady hypnotic tech bass, ragga flow, and other filthy bad habits tend to pepper this Cali native’s genre spanning sets. His years of experience and connection with the crowd makes the magic happen. From knocking the 2 o’clock side, to curating Genuine Bass in Fresno as well as launching Zion’s Gate Records in Portland, Oregon back in the day. Rocking parties across the Left Coast, this man is an asset to any situation…from the block party to the peak hour to the sunrise…

Wolfkin’s energetic, multi-genre DJ sets and productions have earned him opening slots alongside Reid Speed, Lea Luna, Mantis, CRNKN, The M Machine, Loud Pack, Downlink, Party Thieves, Lookas, Big Chocolate, San Holo, and the many talented locals in the Portland, Oregon electronic music community. 2015 was a big year that solidified his place in Portland after joining the DOKI DOKI artist collective with four of Portland’s most talented locals and playing a handful of high profile bookings. With a recent release on the Zakes collective and a booking slot at Oregon’s What The Festival, 2016 is shaping up to be even better.